On 25th September 2015, the United Nations General Assembly, which was attended by over 150 leaders from all over the world, adopted the 2030 Agenda for sustainable development, which is divided into 17 goals – the Sustainable Development Goals (SDGs) – and 169 sub-goals (targets).

The SDGs, and their targets, indicate the global priorities for 2030 and define an integrated action plan for people, the planet, prosperity and peace.

To support the achievement of the new global goals, the 2030 Agenda provides more than 200 indicators for evaluating the sustainability performance of all actors involved in the process of global change.

““The new agenda is a promise by leaders to all people everywhere. It is an agenda for people, to end
poverty in all its forms – an agenda for the planet, our common home”.
Ban Ki Moon, Secretary General of the United Nations..

The 2030 Agenda has replaced the Millennium Development Goals (MDGs), adopted in September 2000 by 193 countries and only partially achieved. 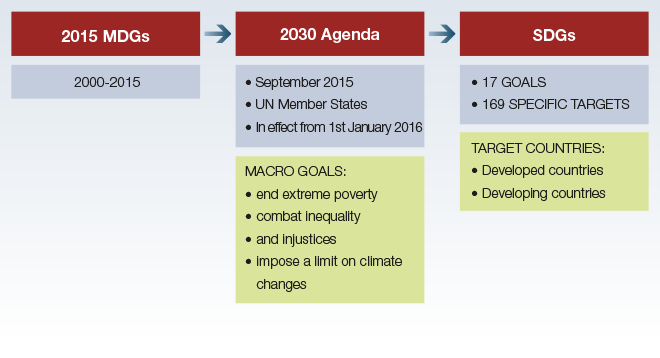 The SDGs differ notably from MDGs, in two main ways:

- Firstly, the SDGs are turning to all States, regardless of the level of development that they have achieved, unlike the MDGs, which were intended solely for developing countries.

“These global goals, if adopted and then implemented, will represent a seismic shift in how the world tackles poverty.
While the MDGs were judged on what they achieved for some,
the new global goals will be judged on what they achieve for all.
That will drive a real focus on the poorest and most marginalised groups.”
Helen Morton, Post - 2015 Global Lead, Save the Children

- Furthermore, while the MDGs were "imposed" on the States by the United Nations, the SDGs have been defined on a broader basis, i.e. through the joint participation of United Nations Member States working to create the same objectives. This mode has guaranteed a general consensus regarding the new global goals.

"I have followed the entire process of consultation with stakeholders, and I've never seen anything like this.
All those who were interested in voicing their opinions, have been invited to do so. We therefore expect a
strong commitment and involvement from all regions and all sectors ".
Lise Kingo, Executive Director, UN Global Compact.

The new goals for 2030, despite being addressed to different categories of actors – governments and institutions, civil society, and non-profit organizations - are intended to be a boost especially for the business world. The SDGs era recognizes that firms play a key and decisive role in sustainable development. A highly proactive approach to sustainable development for the next 15 years, through the development of new responsible business models, investment, innovation, technological upgrading and working in partnerships is required from all companies, regardless of sector size and geographical location.

>> For a discussion on the topic Business & SDGs, click here

Due to the particularly challenging nature of these objectives, their implementation requires close cooperation between governments, business and civil society. In light of this, SDG 17 shows how to achieve an effective implementation of the other 16 objectives: Partnership for the goals, or rather a synergistic, collaborative and proactive action on the part of all sustainable development actors.

This site uses cookies. By continuing to browse the site you are agreeing to our use of cookies.